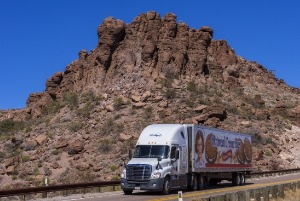 long-haul drivers based in the area. Kingman (Huwaalyapay Nyava in the Mohave language) is nestled between the 7,000-foot Hualapai and Cerbat Mountain ranges in the Hualapai Valley in Mohave County. Kingman is the county seat for Mohave County, but it took many changes between 1865 and 1877, before this officially happened.

During World War II, Kingman was the site of a United States Army Air Force (USAAF) airfield. The Kingman Army Airfield was founded at the beginning of WWII as an aerial gunnery-training base. It became one of the USAAF's largest, training some 35,000 soldiers and airmen. The airfield and Kingman played a significant role in this important era of America's history. Following the war, the Kingman Airfield served as one of the largest and best-known reclamation sites for obsolete military aircraft.

Kingman is a transportation center along the Interstate 40 corridor with more commercial truck traffic than any other route in the United states, at the intersection of the Canamex Highway connecting Canada and Mexico, Old Route 66, US 93 to Phoenix or Las Vegas, and State Route 68 which leads to Laughlin, Nevada. The Kingman Distribution Center's close proximity to Los Angeles, Las Vegas and Phoenix helps McKee Foods deliver product more effectively to the western part of the country.

Kingman's elevation, at 3,336 ft., provides an ideal southwestern climate — neither too hot nor too cold. There are 1,000 miles of freshwater shoreline, six public parks and areas for hunting fishing and hiking. The outdoor buff has choices galore.

Points of interest in and around Kingman.